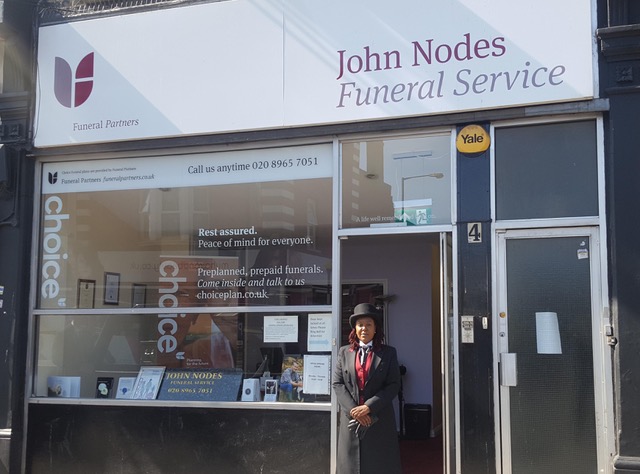 Kim Cophen and Rema Depass started their careers in the funeral business on the same day seven years ago, and have never looked back – working together to serve the community of Harlesden.

Funeral Director Kim and Funeral Arranger Rema have now joined John Nodes, and the High Street branch is open for business after being refurbished. John Nodes Funeral Service has had a presence in London since 1828, and currently also has branches in Ladbroke Grove, Kensal Rise and Cricklewood.

Kim Cophen, a former doctors’ receptionist, said: “We got to know the job together and I couldn’t have asked for a better working partner. Both Rema and I know the area well and can relate to families in the area.

“I’m now a Funeral Director which is something I’ve wanted to do for a long time, it means I support families throughout arranging their loved one’s funeral and I’m there with them on the day. It’s really important to spend time with them and be willing to listen.”

Both Kim and Rema had previously cared for family members, and Rema had worked as a probation officer. Rema said: “We are looking forward to providing a good service to the local community. The building has been brightened up, it looks really nice now and is very welcoming.”

Area Development Manager for Funeral Partners, Hayley Carney, said: “We’re really pleased to have brought in such an experienced team with extensive knowledge of the local community to serve Harlesden. Kim and Rema will really strengthen the service we provide to the people of North-West London.”

The new team will support Brent foodbank, collecting donations in the branch and from local schools and organisations, and they plan to get involved in a number of other community activities.

Now part of Funeral Partners, John Nodes Funeral Service continues to maintain the traditions of community service provided over nearly 200 years by generations of the Nodes family. It was a member of the Nodes family who had the honour of bringing home the body of the Unknown Warrior from France at the end of World War 1.

The John Nodes Harlesden branch is centrally located close to several local churches, West London Crematorium, and Kensal Green and Willesden cemeteries. It is open from 10am to 4pm Monday to Thursday, and by appointment on Friday, and the team can be contacted 24 hours a day on 020 8108 1385, or online at www.johnnodes.co.uk